Of Quilts and Face-Plants: Saturday Potpourri

Just got home from a day trip, in more ways than one. But first things first…

Last night, Mrs. M and I were fortunate enough to go to Mondoville’s historic Ritz Theater, where we saw the local community players put on a production of early 80s Tony nominee Quilters. As it happens, my former student (and current Berries keyboardist) Joseph Schroer directed the play, and his lovely wife Kasey had a major role, with a couple of lovely solo numbers, most notably “Green, Green Green”, but I would have enjoyed the play even without the personal connection.

I think amateur, community theater gives me one of my occasional doses of hope for the world around me. Spare me your Waiting for Guffman — the fact that even in a duckburg like Mondoville, ordinary people put up their time, money, and effort in order to try to make something transient but beautiful for the people around them? That’s pretty cool. The players don’t get big government grants or massive corporate sponsorship — they do this stuff independently and at personal cost… because they want to. They’re one of Burke’s “little platoons” that make society worth living in, and I’m glad they’re here.

As for today, at about noon, Mrs. M came back from the Y and asked if I wanted to take a day trip to Greenville, focusing this time on the downtown area. Since my alternative was grading papers, I was glad to postpone my students until tomorrow. So after a quick lunch, we left the Spawn to manage the Hound of the Basketballs and headed west.

The area we visited today is along the falls of the Reedy River, and it combines the hip, artsy area of town with a riverfront park. There’s a nice, paved trail, which today hosted various walkers, cyclists, and stroller-pushing parents, and plenty of chances to view the falls from above and below, and even among. Which leads us to this: 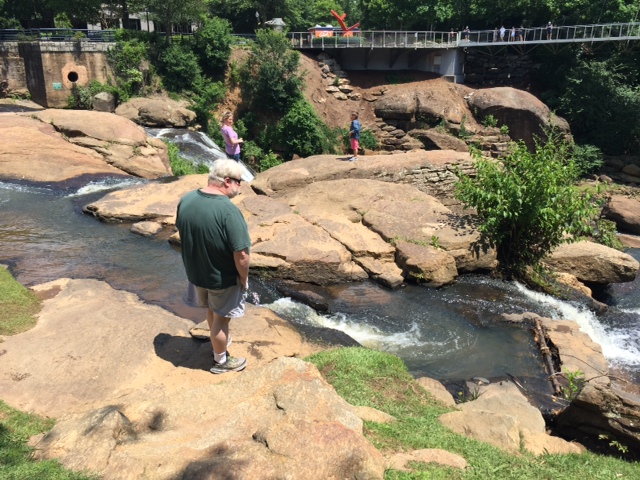 A moment or two after this picture, Mrs. M and I stepped across the rivulet to the large rock you see just ahead of me. It’s maybe a 18- to 20-inch stride. We looked at the falls just below us, Mrs. M getting closer to the edge while I stayed closer to the rock’s center. 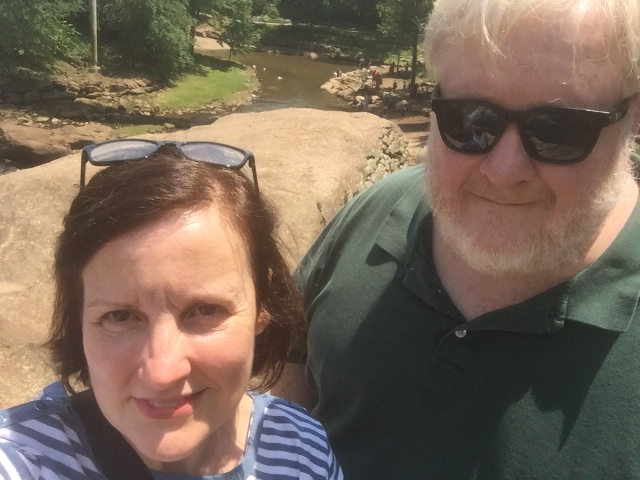 After a minute or two, we headed back to the bank. We watched a woman carrying a toddler step across, and then I let Mrs. M go, and then I strode forward and my preternatural oafishness came to the fore. I made it across and did a full face-plant, or more accurately, right-knee-impact and bellyflop, onto the rock. I don’t know why I fell — I don’t recall tripping over anything. I think it was just my usual combination of forward momentum and poor balance. “I’m OK,” I said — I was just glad I hadn’t pitched over the falls. But given that I did that in front of a few hundred parkgoers and my wife, maybe it would’ve been better just to roll to my left and plunge over the edge.

After making sure that everything was more or less intact — I felt something pop in my back when I hit, and of course, there’s a lot of me to drop on one knee as it smacks into a boulder — I dusted myself off, and apologized for looking foolish. Then we walked through a few stores, stopped at a tea shop where I had an orange smoothie of some sort, and did a little more sightseeing before heading home. The situation was not improved when we stopped for dinner; when I washed my hands, the soap dispenser somehow managed to squirt not only my hands, but the front of my shirt.

By the time we got home, there was significant swelling on the left side of my right knee, and I’m pretty sure I’ll have a pretty impressive bruise by morning. So I’m sitting downstairs with an ice pack on my leg, but the biggest injury was to my self-respect — and it’s not like I had much of that to spare anyway.

I want to take a moment to wish a happy tenth bloggiversary to Jeff Sypeck, whose Quid Plura is a fine example of what the form is good for. He ruminates at medium length on a variety of topics, generally under the heading of medievalism in America. He’s also a pretty nifty poet, and you can find bits and pieces of his work at the blog as well. Check him out. And Jeff — I’m glad you’re here.

On the music front, now that the play has been put to bed, it’s time for the Berries to emerge from hibernation. We currently have shows in Columbia in July and August, and we’ll be playing in the Upstate at the beginning of August as well. More details will follow.

And speaking of music, let’s wrap things up today with a nifty little number from Mexican-American garage rockers Louie and the Lovers. Their lone album was produced by Doug “Sir Douglas” Sahm, and original copies are the sort of thing after which hardcore records salivate. Louie Ortega, the group’s singer and principal songwriter, went on to work with Sahm in the Texas Tornados. This particular track was released as a single by Epic, and appears on the reissue of the album from a few years back. Sahm also was known to do the song live on occasion.

As you might expect from that background and the 1970 release date, there’s a nice jangly feel to the song, and if country rock had paid more attention to this sort of thing and less to the Eagles, I might have liked the genre better. In any case, here’s “Little Georgie Baker.”

1 Response to Of Quilts and Face-Plants: Saturday Potpourri