My break is almost done — the Summer term begins on Tuesday, and will run until nearly the end of June. As a bonus, I appear to have acquired a cough, which will no doubt enhance my lecturing skills to no end. Nonetheless, here’s a bit of what’s going on at this end.

My friend and former classmate Karen Craigo had posted a humorous chart on the Book of Faces a day or two, suggesting silly occupations based on a person’s Myers-Briggs personality type. It occurred to me that I had completed one of those inventories some years ago, but I had no recollection of what the results were. So I found another quickie online questionnaire and took another shot. (Wow — a 5-minute online questionnaire, leading to a personality profile. Can’t you just taste the science?)

Anyway, the result I got indicates that I’m something called an INFP. That vaguely triggered a memory of my earlier experience of this business, which seemed to echo last night’s results. Per St. Wiki, “According to theory, what drives INFPs are strong senses of right and wrong and the desire to exercise creativity, even if only behind the scenes. Weaknesses may include sensitivity to criticism, poor organization, and low assertiveness.” I certainly recognize the weaknesses, although I prefer to think of that last bit as a distaste for confrontation. And I do write and do music, so maybe there’s some truth to this stuff.

On the other hand, there’s that whole Introversion/Extroversion thing. I’ve never really had much of a problem with things like public speaking, doing readings, playing music, or lecturing my classes. But those are performative acts — personae I assume for given situations. On some level, I understand the rules for those rhetorical moments. Similarly, I describe myself as the Mondoville faculty’s court fool, and can generally be counted on for a few heckles at meetings.

But in other social settings — parties, conventions/conferences, and the like — Mrs. M is much my superior, with a knack for engaging people she doesn’t already know. I’ve seen it happen fairly often at faculty parties and that sort of thing. Meanwhile, I just tend to feel really dorky and nervous about talking to the “cool kids.” At the last Noir at the Bar, the Spawn actually had to prod me a bit to get involved in the pre-reading chatter. I don’t know what to say, and feel like a very large and poorly operated marionette, with unnatural movements and a high risk of knocking things over.

I remember that Mom told me Dad was the same way. He was sometimes accused of being aloof, standoffish, or intimidating (some of my high school friends referred to him as The Dragon) but in fact, he was just kind of uncomfortable in those settings.

So as I said, maybe that online questionnaire was more accurate than I gave it credit for. And by the way, Karen’s comic chart suggested that my career options included “failed artist,” “town mooch,” “cackling sea hag,” and “construction site copper wiring thief.” Good to know in case this professing thing doesn’t pan out.

And after that, I was chatting with a friend who mentioned another online inventory that allegedly measured personality strengths, so I took a shot at that as well. It reports that, of 25 personality strengths, my top qualities are humor, love of learning, fairness, spirituality, and curiosity. At the bottom of the list? Teamwork, hope, and self-regulation. Sounds about right.

As I was talking about my Dad — who would have turned 75 last Wednesday — I remembered his creativity. Most of the time, he expressed that by painting and drawing (We have numerous examples of his work around the house, and when we were told to remove valuables from the house after the murders, that was what we saved, because it was irreplaceable.), but he did some writing as well from time to time.

Not too long ago, I was rummaging through some of our books, and found a collection of poems from high school students, published by the American Poetry Society in 1962, my Dad’s senior year. 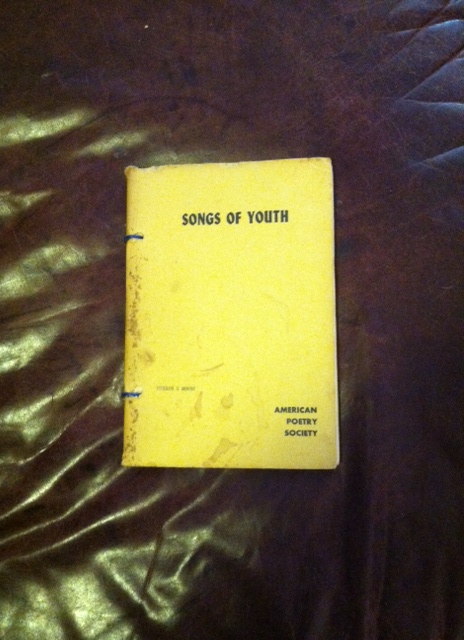 I found a news clipping that said that while a number of students from Dad’s high school had been published, he had received special recognition. Sure enough, he’s on page 23 , and so a visit to Poetry Corner.

A starry oblong framed within

The open window. No

I’ll be teaching two small classes in this upcoming term, my usual FroshComp and a Brit Lit survey. But I’m trying something a little different with the latter course, teaching it in what we call a blended format, with traditional classroom and asynchronous, online components. I’ve not done this before, and so will be making elements up as I go, but it should be interesting. We shall see.

And that should pretty well do it for this particular installment, so I’ll leave you with some music. Growing up in Nashville in the 70s, Saturday late afternoons were television gall to my pre-teen soul. The pre-prime-time hours were filled with syndicated country music shows. Not just Hee Haw (which I actually kind of enjoyed because it was funny sometimes, and because in elementary school, I walked through the original Hee Haw “cornfield” at the Channel 5 studio), but shows like Pop Goes the Country and the bane of my single-digit existence, The Porter Wagoner Show. These shows bored me to distraction; I didn’t like the music, the audiences tended to clap on the wrong beats, and the “comic relief” of Speck Rhodes struck me about as funny as feeding my eyelids into a paper shredder.

But forty-plus years later? I’ve developed an appreciation for the country music of the late 60s and early 70s. For one thing, my taste for noir makes me a pretty good audience for those drinking, cheating, and killing songs, and I particularly like the way that a lot of these guys sang this stuff without winking at all — they sang it like they meant it, and in these irony-poisoned days, that counts for a lot.

And that brings us to today’s tune. It’s by the abovementioned Mr. Wagoner, whose grave I’ve visited in the same cemetery as my parents. The album it comes from is called The Cold, Hard Facts of Life, and not only does it live up to the title, the album cover has become one of my all-time favorites, and belongs on a T-shirt. In fact, there was a recent crime fiction anthology based on Johnny Cash songs, but I think this album alone might make for a pretty good anthology itself. From 1967, this is “Julie.”

But I still don’t think Speck Rhodes was funny. See you soon!

Dad, husband, mostly free individual, medievalist, writer, and drummer. "Gladly wolde he lerne and gladly teche."
View all posts by profmondo →
This entry was posted in Culture, Family, Literature, Music, Why I Do What I Do. Bookmark the permalink.