While I was in Florida, a Facebook friend of mine posted a link to an article about the life and death of Warren Zevon. Writer Steven Hyden is pretty evenhanded in the piece, noting both Zevon’s artistic gifts and his poor choices, and I think the article is worth a read, particularly if you like Zevon’s work (as I do). However, there was a line in the piece that has echoed in my head since I read it a few days back:

Many of the things that made Zevon seem like an iconoclastic outlaw in the ’70s make him disreputable in the “virtuous music listening” era. As a songwriter, he was attracted to ironic humor and lowlife characters; as he sings in 1991’s “Mr. Bad Example,” many of the people who populate the Zevon-iverse “like to have a good time” and “don’t care who gets hurt.” Music critics now tend to prefer earnestness and unambiguous virtue[. . .]

And then there is Zevon’s checkered personal life, outlined with bracing candor in Crystal Zevon’s book. In his drinking days, Warren was physically abusive; when he got sober, he kept apologizing for a specific instance when he struck Crystal, giving her a black eye, which made her resentful. Why didn’t he say sorry for all of the other times he hit me? And then she realized that he had been too drunk to remember those other instances.

Later in life, he made amends with Crystal, and personally asked her to write his biography, warts and all. That’s not an excuse for his worst behavior, or a plea against “canceling” him, but rather an acknowledgement that his transgressions have long been part of the historical record, which is more than you can say about many of his peers.

I don’t dispute that, and as Hyden observes a few lines later, each of us is free to make an individual judgment about Zevon the man and Zevon the artist. Still, I have to acknowledge that I’m bumfuzzled by the concept of “virtuous music listening” or whatever the equivalent to that might be in other forms of art. 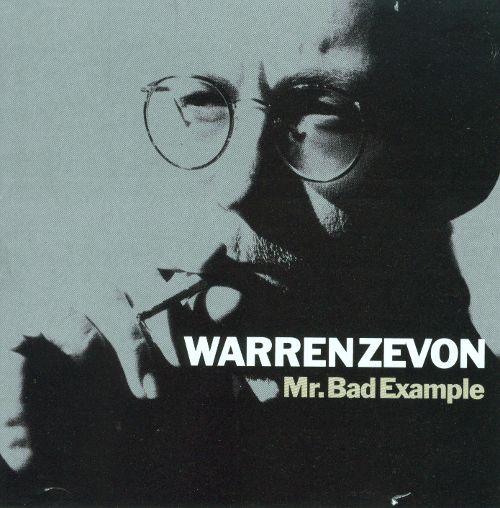 Well, that’s one for truth in advertising.

In point of fact, a lot of my favorite artists have been deeply flawed. John Lennon beat Cynthia — but he also wrote “In My Life.” Frank Zappa was unlikely to win many father-of-the-year awards, and seemed in many cases to base his relationships on the service they might offer his art. But he was a brilliant composer, performer, and discoverer/developer of talent. H.P. Lovecraft’s expressed racism was vile — and yes, it shows up in his work as well. But he also established the subgenre we think of as “cosmic horror”, and the creatures he imagined have taken a significant part in our cultural imagination. And what of Thomas Malory?

Once again, I’m reminded of Harlan Ellison’s comment that no one ever read a lousy book because the author had a beautiful soul. Insisting that the art we encounter be virtuous seems to be overly restrictive — we live in a fallen world, and to ignore the art that reminds us of that is simply a way to lie to ourselves. But to go even beyond that, and to insist that the artist himself must meet some sort of moral standard seems to me to be Puritanical, and unless you’re John Milton, Puritanism and art are unlikely bedfellows.

Having said that, I find myself considering some pretty lousy people who have done remarkable work. However, I don’t think it’s inconsistent to think that Roman Polanski is a rapist who deserves punishment by our legal system and to think that he’s a brilliant filmmaker. Likewise, while I believe Phil Spector is exactly where he should be, “Be My Baby” is still an amazing song.

Or to put it another way, Samuel Taylor Coleridge believed that if William Wordsworth could teach us through his poetry how to develop a Wordsworthian soul, it might mark a step forward in humanity’s spiritual evolution and hasten the Millennium. When I mention that to my students, they find the idea pretty wacky, and I’m inclined to agree. But it seems to me that conversely, insisting that we “cancel” (to use Hyden’s term) not only non-virtuous artists, but their art as well is equally bizarre, and has the disadvantage of limiting the spaces in which we are allowed to dream.

But we live in a bizarre era, I suppose. All the same, I’ll keep listening to Mr. Zevon’s work.