We’re sliding out of 2018 in a skosh more than three hours here in Mondoville, and I think I’ll get things going with a piece from the Golden Trashery of Ogden Nashery:

Good Riddance, But Now What?

Come, children, gather round my knee;
Something is about to be.

Tonight’s December Thirty-First,
Something is about to burst.

The clock is crouching, dark and small,
Like a time bomb in the hall.

Mrs. M and I decided to wrap up the year with a long weekend’s trip, in this case, to Myrtle Beach. We left the Spawn in charge of the Hound of the Basketballs and departed Mondoville around one on Friday afternoon. We had been on the road about ten minutes when my phone blatted with a tornado warning. The Spawn retreated to the downstairs with the dog, and we let her know when the all clear was sounded. As it turned out, however, the warning was for a different area of the county. After that, the remainder of the drive was uneventful, and we rolled into town about 4.

We stayed at a place we’ve visited in the past, and got a room with a balcony overlooking the sea — oceanfront views are pretty much my dealbreaker, and I spent quite a bit of my downtime looking at the waves and listening as they fell against the shore. But that wasn’t an issue when we arrived; the rain had followed us from Mondoville to the coast, and had turned into a pea soup fog. I could hear the ocean, but seeing it would have to wait a couple of hours. We resisted the concierge’s blandishments to attend a timeshare sales presentation in exchange for attraction tickets, and instead went to a branch of a semi-upscale pizza joint. Part of our division of labor for road trips of this sort is that I drive the long hauls, while Mrs. M frequently does the driving around our destination. This allows me to sightsee as she drives, and Myrtle Beach after dark is actually a fair amount of fun to observe, with plenty of neon marking the assorted beachwear shops, pancake houses, and other monasteries of the Tourist Trappists. Eventually, though, we found the restaurant in a less touristy section of town. 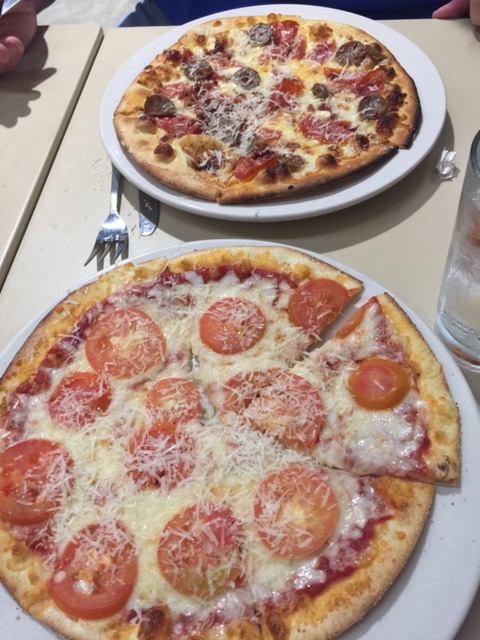 The fog had lifted by the time we returned to base, so I spent a half-hour or so sitting on the balcony and watching the crests of the incoming waves inscribe white lines against the darkness of the water. Occasionally I’d see someone jogging along the edge of the water. But after a moment, I saw a flicker of light over to my right, about 100 feet up. It reminded me of a hot air balloon at first, and then I realized it was a Chinese luminary (the paper kind, not an Asian celebrity). I called Mrs. M onto the balcony, but it had disappeared. Fortunately, a second one appeared within a few seconds, and we watched as it flickered eastward, over the sea and into the night.

The next morning, I went down and took advantage of the hotel’s breakfast buffet while Mrs. M slept in for a bit. When I got back, she was getting ready for the day, and a member of the housekeeping staff stopped by to bring us fresh towels and such. In the past, I’ve noticed that a lot of the service folks in the area tend to come from other countries, often in Africa or Eastern Europe. That wasn’t the case this time, but I knew the dialect immediately. The housekeeper was a young woman from Kenosha, WI, but her accent was pure Chicagoland. We learned that she had only been in town for about a month, and had moved to be with her boyfriend, who works at the registration desk.

We had been talking for a couple of minutes when another staff member came by to make sure everything was all right. I was glad to see that — it’s a really hard job, and one with the potential for unpleasant moments as well (After all, you never know just who that guest may be.), so it’s good that the staff look out for one another.

Mrs. M wanted to do some shopping, so I let her drop me off at a bookstore/frappuccino reserve while she went on safaris of her own. Our hotel sits on the eastern side of Ocean Blvd., which as the name implies, is the main beachfront drag in town. Most of the hotels on the eastern (beach) side are big, sprawling complexes, forming a sort of wall between the street and the ocean, only allowing glimpses of the ocean between one structure and the next. On the other side, however, most of the hotels are older, and I suspect many of them date to the 1960s, and some to the 50s. While I opt for the oceanfront rooms, I occasionally find myself tempted by these reminders of other times.

And as it turns out, I must not be the only one. I noticed one of these facilities was advertising itself as a retro experience, and I think I may have to check it out before too awfully long. The Waikiki Village Motel, built in 1963, is on the National Register of Historic Places, and was recently renovated/restored to something rather like its old glory.  It’s hard to resist the thought of sleeping in a room like this: 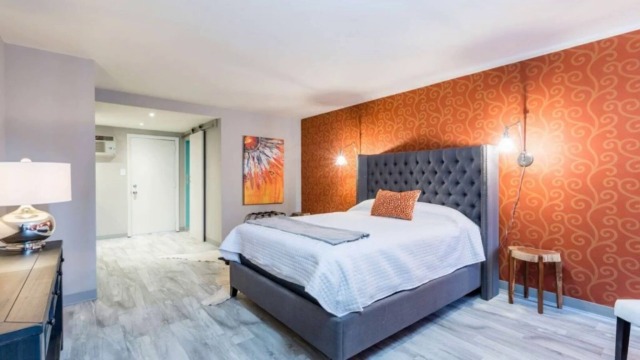 Even though I’m a teetotaler, this just seems like a place built for drinking zombies while chatting with Shell Scott. And that’s pretty cool.

While I hung around the frappuccino preserve, I read Eric Idle’s new autobio, which struck me with its humor (unsurprising) and with Idle’s gratitude for the way his life has turned out. It’s a gracious book, which isn’t a word I typically apply to showbiz bios. I also very much enjoyed his accounts of his friendship with George Harrison, and the evident love the two performers had for one another.

It was maybe an hour’s read, and I had time to look at a couple of graphic novels before Mrs. M returned so that we could catch an early-bird special at her favorite touristy buffet. Not that I’m complaining, mind you — I had to spend quite a while letting dinner settle when we got back to the hotel, and resumed my position on the balcony. I noticed there was a small pride of cats that patrol the hotel’s outdoor pools and beach area. An orange tabby appeared to be the leader, but there was also a black-and-white wingcat, and a gray tabby showed up from time to time as well. At one point, I amused myself by making little noises from my balcony, which would cause the cats below to stop and look around in befuddlement before resuming their rounds.

After a bit longer, I went down to the beach myself, standing at the edge of the incoming surf. The light from the hotels behind me threw my shadow toward the waves, which erased it as they approached, only for it to reappear as they would ebb. I particularly enjoy the bass rumbles of the larger waves that broke amidst the general white noise.

After some of that, I returned to the room and watched enough of the Alabama-Oklahoma game to know how it was going to turn out, and then we called it a night.

Yesterday began as the day before had, but Mrs. M spent a little time on the hotel’s elliptical machines, and we both made it to the beach before we resumed our sightseeing and shopping. 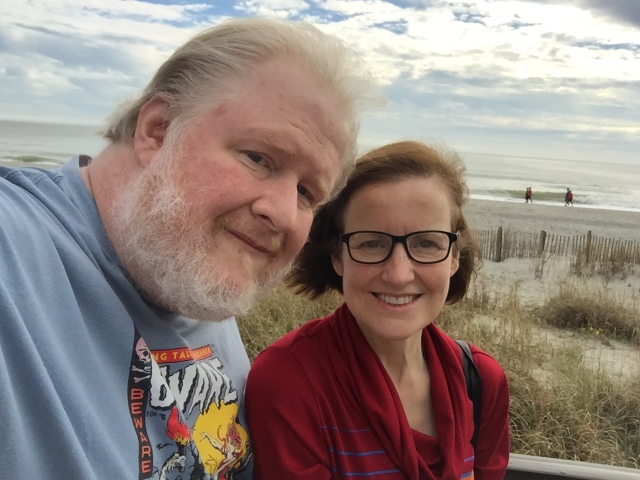 At a different bookstore, I ran across Written in Dead Wax, the first of British author Andrew Cartmel’s “Vinyl Detective” series. It’s an amateur sleuth novel, with the hero in this case being an obsessive record collector and reseller. A beautiful woman hires him to find an absurdly rare jazz album, with the promise of a significant finder’s fee. As you might expect, complications ensue. The first-person narrator’s voice is funny and charming, and presents a world of audiophile obsession that some of us (ahem) might recognize. In that respect, the book reminded me a little of The Music Lovers, Jonathan Valin’s penultimate Harry Stoner novel. But Cartmel’s book is much lighter in spirit (even though Music Lovers is probably the lightest of Valin’s series), and leaves the reader (or this reader, anyway) snickering if not guffawing.

I made it through the first two-thirds or so of Dead Wax before Mrs. M showed back up, so I went ahead and bought it to finish last night at the hotel room. As it happened, Mrs. M had picked up a few things, and encouraged me to find some stuff I wanted as well. So I went ahead and ordered the next three books in the series. That bodes well.

We decided to try a Mexican place for dinner, and it seemed to be much more of a local place than the other restaurants we hit this weekend. Like the pizza place from Friday, Fiesta Mexicana is past the most touristy stretches of town, and we enjoyed a leisurely meal.

Afterward, we found an ice cream parlor and had dessert before getting back to the hotel. As I said, I finished the book I had bought before spending another half-hour or so on the balcony and calling it a night.

We were on the road back to Mondoville by about 10:30 this morning, and after a lunch break and a couple of other stops, we got home around three. The Spawn and Hound both seemed glad to see us, and we’ve taken down the Christmas decorations and prepared ourselves for our customary New Year’s carbonated grape juice in a little while. Not a bad way to wrap things up, I think, but I think we need a little music, don’t you?

See you in the New Year!