So Long to a Legend

Hal Blaine, one of my drum heroes, died today, a little more than a month after celebrating his ninetieth birthday. He’s generally thought to have been the most recorded drummer in history. As St. Wiki observes:

Blaine played on numerous hits by popular groups, including The Mamas and The Papas, Nancy Sinatra, Jan and Dean, Elvis Presley, John Denver, the Ronettes, Simon & Garfunkel, the Carpenters, the Beach Boys, the Grass Roots,[2] the 5th Dimension, the Monkees, the Partridge Family, and Steely Dan. He played on 40 number one hit singles, 150 top ten hits and performed on, by his own accounting, over 35,000 recorded tracks. Blaine is a member of the Rock and Roll Hall of Fame, Musicians Hall of Fame and Museum, and the Percussive Arts Society Hall of Fame. He was inducted into the Modern Drummer Hall of Fame in 2010.[3]

Furthermore, Blaine played on six consecutive Grammy “Record of the Year” winners, covering the span from 1966 to 1971. He was one of the first five sidemen inducted into the Rock and Roll Hall of Fame (evidence that they do occasionally get it right.) And it wasn’t all that long ago that I noted his key part in one of the most memorable songs of the rock era.

Here’s a tour of some of his work:

I think Blaine was on the cover of the first issue of Modern Drummer I received when I started subscribing many years ago. He was also one of the stars of The Wrecking Crew, a wonderful documentary about the LA studio scene, done by Tommy Tedesco’s son Denny. The movie is well worth your time. 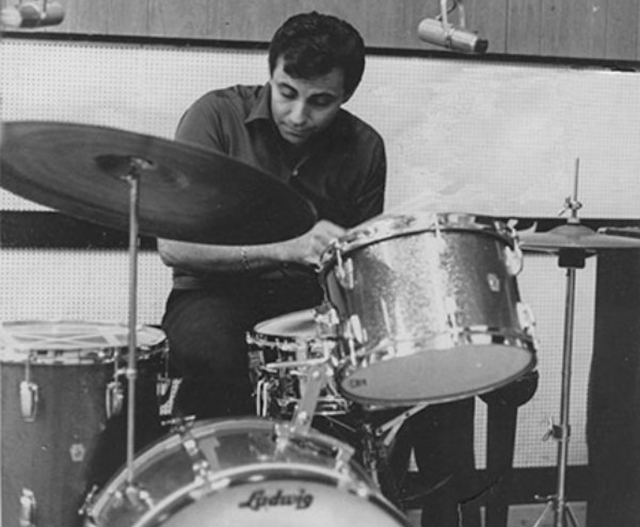 Like my other drum hero Ringo Starr, Blaine’s work has always seemed to me to be a marvelous example of playing for the song — the difference between drumming as athletic event and drumming as music. That’s what I strive for when I play, and when I talk to young drummers at the college, I tend to point them in his direction. I intend to keep doing that.

But I’m going to wrap this one up with a wonderfully tasteful Blaine performance that happens to be on my mom’s favorite song.

So long, Mr. Blaine — thanks for the music.

Dad, husband, mostly free individual, medievalist, writer, and drummer. "Gladly wolde he lerne and gladly teche."
View all posts by profmondo →
This entry was posted in Culture, Music, Why I Do What I Do. Bookmark the permalink.

2 Responses to So Long to a Legend