Doing Better When You Can…

Thirty-two years ago, I was not quite 22 years old, and was about to become the first member of my family to go to grad school, at the U of Kentucky. I drove a 1972 Chevy I called the Monte Karloff, because it was big, green, and scary looking. I had bought it for $500 a year earlier, after my brother totaled my first car on a joyride. I moved into a University-owned efficiency apartment, furnished with a sleeper sofa, a rollaway cot, a dining table with four chairs, and a desk. There may have been one other chair for lounging, but I don’t remember for sure.

Twenty-one years ago, Mrs. M, the Spawn (age 15 months), and I moved to a University-owned townhouse in Muncie, Indiana, as I prepared to start work on my doctorate at Ball State U. We had a 1993 Chevy Cavalier that we got for a good price because it had been in a flood — but we didn’t know that until later. We just thought we had gotten a good deal, and since the car lasted until we moved to the Greater Mondoville area, I suppose we did.

My family helped as much as they could each time around. When I had an exhaust problem in the Monte Karloff (which I discovered by nearly asphyxiating myself on a drive from Lexington to Northern KY — seriously, my head hurt for three days afterward), they gave me my late grandfather’s 1974 Ford Gran Torino, which got us through a few more years. And on any trip home, I was assured all the leftovers I could fit in my refrigerator when I got back to Lexington, along with various other groceries. My folks carried me on their car insurance through most of that first stretch of grad school. But their resources were limited — a combination of some years living beyond their means and other years of medical debt that stemmed from my brother’s congenital heart problem. Still, they did what they could.

Now it’s the Spawn’s turn for grad school — she’ll be heading to Maryland in a little over a week. This past weekend, she and Mrs. M went up and did some initial setup work for her apartment, on the fringe of campus. Her standard of living will be higher than mine was — unlike either of my grad school apartments, hers is air-conditioned, for example, and we were able to help her with some furniture and other household supplies.

But of course, last week our mechanic informed us that the Spawnmobile might be adequate for Mondoville grocery getting, but that its prospects of making it to College Park were dubious at best. So she needed a fresh ride. Fortunately, we’ve been in a position to help on that front as well, which brings us to today.

Mrs. M and I made about a 100-mile drive today, to a car dealership on the other side of the state line. We drove up together, but came home separately, as I piloted the Spawn’s new ride. 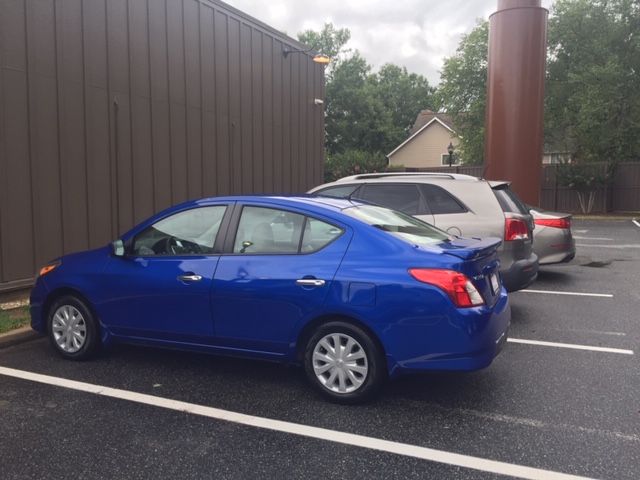 The fact that it’s nearly a Kentucky blue doesn’t hurt either.

It’s neither new nor fancy, but it probably won’t suffocate her, either, and I feel fortunate that we can give her a boost as she gets started on the next part of her life.

I think my folks would be pleased as well.

Dad, husband, mostly free individual, medievalist, writer, and drummer. "Gladly wolde he lerne and gladly teche."
View all posts by profmondo →
This entry was posted in Education, Family, Why I Do What I Do. Bookmark the permalink.