I’m in my office, and just finished moving a bunch of CDs to an empty shelf. Well, not quite empty — turns out there was a fair amount of dust there, which accounts for the sneezing fit I had a few minutes back. Fortunately, I had some tissues handy. As for the rest…

Friday marked my 54th birthday. I brought some Krispy Kremes to my 8:00 History of the Language class, taught my Froshcomp sections, and headed home that afternoon to wait for Mrs. M’s arrival from work. We drove up to Clinton for dinner at the Blue Ocean seafood restaurant, which seems to have become our go-to special occasion option. Mrs. M likes the grilled salmon, and I went for a large serving of fish and chips, followed by a hefty slice of cheesecake.

Then it was home, for those gifts that weren’t delayed in delivery. Specifically, I received DVDs of one of my favorite noirs and a Devo concert video to replace one I unwisely loaned out. (Still to arrive are DVDs of Frank Zappa and the wonderfully creepy Hangover Square, along with the latest album from LA-via-Detroit garage-popsters the Singles, a replacement copy of William Goldman’s first novel,  and the collected stories of Ambrose Bierce, compared to whom I am a Pollyanna.) I also received a copy of Give Us Barabbas, from the Masters of Reality, and my evening’s reading, Joe R. Lansdale’s The Elephant of Surprise.

Elephant is the latest in Mr. Lansdale’s Hap and Leonard series of Texas-sized action/mystery/adventures. In this one, our heroes more-or-less inadvertently rescue a seriously injured young woman. It turns out that said young woman knows some things that a local crime lord would prefer to have forgotten, and keeping her alive will require, um, significant effort.

The book is very long on action, and this is one of Lansdale’s strengths as a writer. He handles action scenes better than nearly anyone in the business, and he handles them relentlessly in this one. In the absence of a shot of adrenaline, sections of this book would make a fine substitute eye-opener. The bad guys are more than sufficiently threatening — not in the freak show way we occasionally find in these novels, but in the presentation of  antagonists who are both evil and nearly hypercompetent. In particular, there’s a martial artist that I wouldn’t be surprised to encounter in a later novel — God knows I wouldn’t want to in real life. And as usual, Hap Collins’s voice remains resolutely fresh and resolutely Texan (though as I’ve mentioned before, I can also hear echoes of my working-class Tennessee background.) It’s a fun read, and a quick one; it took me about an hour.

If there is a shortcoming, it’s that sometimes the action seemed to come at the expense of the interplay between characters that makes the series endearing for me. I really enjoy our heroes’ interaction with the other people in their lives — it’s one of the things that keeps the series from becoming cartoonish — and I didn’t find enough of it in this one. Still, it was a fine Friday night thrill ride, and a worthy addition to the series.

After finishing Elephant, I did something I don’t usually do and watched a network TV show. I’m not one of those “Oh, television” types — I’m just generally reading something or listening to music or playing online or some such in the evening, and consequently, don’t watch much non-sports TV these days.

But the daughter of a friend of mine was making her network debut, and how could I pass that up? And she did a terrific job, one that we can hope will lead to more work. Acting’s a rough, demanding business, as is music, and I have considerable respect for anyone who can reach the level that Ms. Bond has, especially at her tender age. Brava, kid. Hope to see you again before too long.

Yesterday was a day for sports, as the Mondoville footballers opened a three-game home stand, taking on conference foes Tusculum U from the other side of the Appalachians. It was another hot day, with a high in the 90s, but I didn’t get as burned this time as I was at the home opener.

I picked up lunch at the concession stand, made my way to my seat, opened my drink — and got sprayed, as apparently I had jostled it a bit in the process of getting situated. In particular, my right leg and corresponding part of my shorts got a substantial blast of cola. I blotted up what I could, resigned myself to a bit of residual stickiness, and hoped it wasn’t an omen — at 0-3, we didn’t need any further harbingers of doom.

But as it turned out, after three hours of aggressive and opportunistic defensive play (including five forced turnovers, a scoop-and-score, and a safety), the might of Mondoville carried the day, 30-20. Next week’s challengers come from Mars Hill U, and the forecast looks to be 10-15 degrees cooler, which is a good thing indeed. By the time I walked home, I was a bit overheated and had to rinse off in the shower before stretching out under a fan.

Then it was time to see if my beloved Kentucky Wildcats could extend their five-year winning streak against Flagship U from Real City. Afraid not; the locals thumped the visitors from my old alma mater soundly enough for me to find something else to do by the fourth quarter, and it looks like it could be a long season. Of course, being a UK fan means that the solace of basketball season isn’t too far away, so the pain will pass soon enough.

And speaking of pain, I hope you’ll recall that a passel of terrific writers will be bringing the literary pain on 10 October, as Noir at the Bar makes its Mondoville debut.

Alas, this is slightly dated, as John Carenen has had to withdraw from the night’s readers, but that just leaves the rest of us with a little more room to offer thrills and chills, and maybe even a chuckle or two. We hope to see you there!

And nine days after that, I’ll be at Grecian Gardens restaurant in Real City, talking to a lunch meeting of the Palmetto chapter of Sisters of Crime. In both cases, I’ll have some copies of BGW available for purchase, and I’ll even sign it if you don’t think it’ll lower the value too much.

Meanwhile, we got some good news, learning that Mr. Block’s latest “art-thology”, From Sea to Stormy Sea got moved up on the printing schedule, and will be — well, I’ll let him tell you:

From Sea to Stormy Sea: 17 Stories Inspired by Great American Paintings, coming in two months from Pegasus. This was originally set for September release, then pushed back clear to February for lack of available 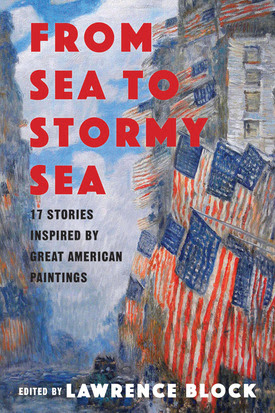 press time. And then a printer found room in his schedule, and November 19 is the release date.

I assume this is in the tradition of In Sunlight or in Shadow and Alive in Shape and Color. Are the paintings as beautiful this time? And are the stories as good?

Oh, right. I forgot to mention myself. I wrote a new story for the book, to go with a painting by Raphael Soyer. And, of course, I supplied the usual self-serving introduction.

I’m really proud of this anthology, and am very happy the pub date has been moved up in time for Christmas, as I’d be hard put to come up with a better book for the Holiday season. Pre-ordering will guarantee you have books in hand in timely fashion.

Oh, and here’s a little something to pique your interest. One of the paintings is by the father of one of the writers. Yes, really.

Practically sells itself, doesn’t it? Well, it does if you buy it, so there!

All right; even birthday weekends must draw to a close, and there are lessons in need of planning, so I’d best close this post. I discovered Johnathan Pushkar last night. Based in Nashville, he has a Rickenbacker 12-string and a serious British Invasion fixation. (“SOLD!”, the Prof cried.) Plaintive, jangly songs about girls — what else do you need? Here’s his new single, and even if you’re so cold you don’t love it, it’s only two minutes long, so what’s there to lose?

Dad, husband, mostly free individual, medievalist, writer, and drummer. "Gladly wolde he lerne and gladly teche."
View all posts by profmondo →
This entry was posted in Broken Glass Waltzes, Culture, Education, Family, Literature, Music, Why I Do What I Do. Bookmark the permalink.