I was informed today by my Dean that it looks like my sabbatical this fall is a go, pending the college president’s signature. As I noted some time back, I intend to spend it focusing on my creative work, and I’m really grateful for the opportunity. But there are other stamps to discuss as well.

When I was a kid, I was rummaging through some boxes of my dad’s old stuff that I found in our semi-finished basement or garage — I really don’t remember which. In any case, one of the things that caught my eye was a large book. I remember it as being off-white, either the result of age or the years of nicotine exposure. (Both my folks were heavy smokers; I ran the numbers once, and figured out that when Dad wasn’t in his office or asleep, he averaged one cigarette every eight minutes. Mom didn’t keep that pace, but wasn’t too far behind. Even now, I find things of theirs that still smell like cigarette smoke.) What I can’t remember is whether the cover was leatherette or cloth — I can envision it both ways.

Even when I was a kid, I operated under the assumption that anything booklike was fair game, so I opened it up and discovered it was a stamp album — probably Dad’s from when he was a kid or early teen. I spent a lot of time looking at the pages of used stamps, stuck directly to the appropriate spot in the album. I showed it to a few of my friends, and one of them — it may have been Bobby Heath from across the street — told me that some stamps were worth a lot of money. And I remember finding ads in my comic books with much the same message. 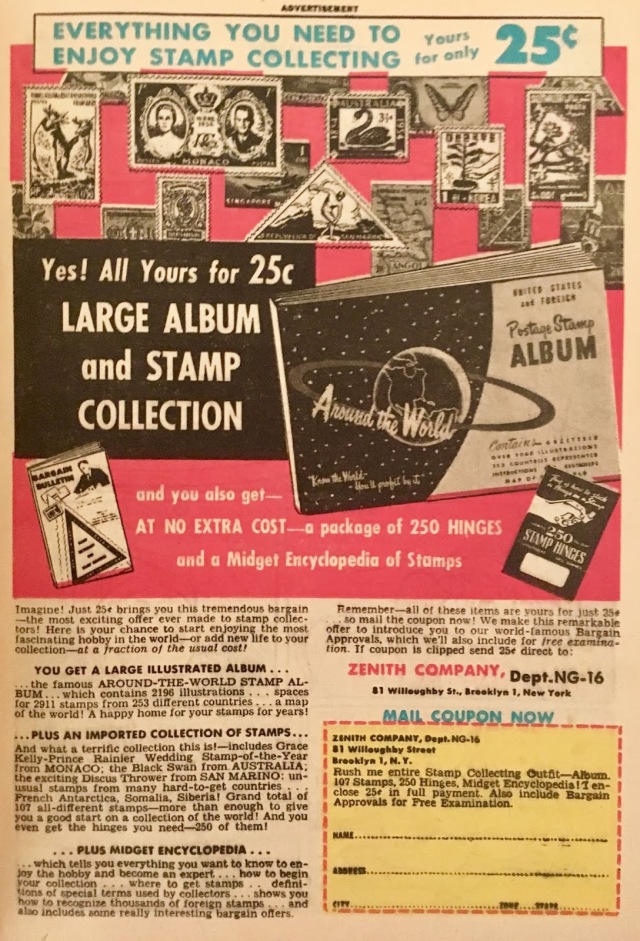 This one almost certainly predates me, but you get the idea.

Indeed, I had read somewhere about a stamp from someplace called British Guiana that was worth an enormous amount. That was true, but it was not to be found in Dad’s old album.

At the time, with the naive rapacity that kids that age have, I considered becoming some sort of philatelic tycoon, but a lack of initial capital (I didn’t have an allowance as a kid — my folks couldn’t swing it, and the job opportunities for 4th-graders were limited), combined with my discovery that even if I could afford stamps, I lacked the patience and dexterity to do much more than lick them and stick them in the book. While that was fine for a book of S&H Green Stamps (or the competing Top Value brand we received in the South), this was a different game altogether.

Reportedly, one could trade insane quantities of these for household items, but I really only know this by hearsay.

And essentially, thus ended my philatelic career, if not all of my interest. Dad’s album went into still another box, and now likely is in a landfill. But because my mind works the way it does, articles and such about stamps found their own folder somewhere in my head, and I’ve never minded having that info there. I guess that though I’m not a philatelist, I’m something of an interested layman. “Homo sum, humani nihil a me alienum puto” and all that.

All of this is basically by way of introduction to LB’s latest book, Generally Speaking. Once upon a time, Mr. Block wrote a series of columns for Linn’s Stamp News, a magazine for collectors. This book is a collection of those columns, interspersed with bits from Block’s Keller stories, which follow the adventures of the eponymous hit man and philatelist. Block himself engages in the hobby (stamp collecting, not murder-for-hire, which is a job and not a hobby in any case), and he brings the collector’s passion to the pieces in the book. However, the articles live up to the title — even layfolks like me can find interesting points in the columns. And of course, Block is always an engaging and entertaining writer, and that’s true here as well. It’s said of certain actors that it would be worthwhile to hear them read a telephone directory. I suppose that Lawrence Block could likely write a telephone directory that warranted pleasure reading.

Not a telephone directory

But in fact, Generally Speaking holds the reader’s attention whether it is being read in short bursts (a quick column or two) or longer sections. One gets a sense of the hobbyist’s fascination, of course, but one needn’t share the hobby to find the work of interest. It only requires an appreciation for good writing, which is here in abundance.

If you are a philatelist, or know one, Generally Speaking will brighten your (or his, or her) day. If you aren’t  a philatelist, the book might send you in that direction. And who knows? Maybe one day a kid more dexterous than I was will discover an album and a copy of Block’s book and engage with both. There are worse pleasures to encounter.

1 Response to Stamps of Approval