Last night we made it back to the venue we tend to think of as our home, Columbia’s Art Bar, as part of a 4-band bill celebrating the club’s 12th anniversary.

I made it to the venue at about 7:15, and since we were the only band playing indoors, I was able to go ahead and set my gear up on the stage, which I had done before the other guys showed up. Still, in my next life, I think I’ll play harmonica or something — loading would be much easier. As we would expect of Columbia on the cusp of August, conditions were steamy, and I spent a lot of the evening drifting from the outdoor performances to the air-conditioned indoors. (I was also wise enough to slug down a 32-oz. bottle of Powerade before leaving for the venue, and to gulp down a lot of ice water at the gig — I didn’t want a repeat of my last visit.) Major props to the other three bands and the crowd, however, who toughed it out for greater or smaller chunks of the duration.

We had never done a show with any of the other bands on the bill, but I actually welcome shows like that — it’s a chance for me to discover cool new sounds and for the band to make new friends. Tonight was no exception.

First up was Fidelio, the latest incarnation of a collaboration between Amelia Quint (vox, gtr, keys) and Zach Toman (likewise), along with a new rhythm section, whose names I’m afraid I didn’t catch.

Their music was an interesting blend of classic rock influence with a Southern Gothic vibe, moody and powerful. Ms. Quint’s vocals remind me at times of Ann Wilson’s from Heart, and Mr. Toman’s fretwork ranged from supportive to scorching. Meanwhile the bass and drums laid down patterns of groove and intricacy. Nice to meet y’all — I hope to see you again really soon.

The next act were local rockabilly stalwarts The Capital City Playboys. They slammed their way through a 45-minute set of thrash and twang, and had the audience’s serotonin flowing.

Opening with a nifty cover of Link Wray’s “Branded”, they segued smoothly from tune to tune, and even threw in a cover of Motorhead’s “Ace of Spades” that recognized Lemmy’s own love for the intersection of country and rock. The crowd, which grew as night fell, ate it up like good barbecue, and there was much shimmying and shaking to be seen. The local alternapaper has said these guys may be the town’s best live band, and they may have a strong case.

The real headliners came next, with the continuing return of crunch merchants Hot Lava Monster, who are retaking stages after a fallow period. 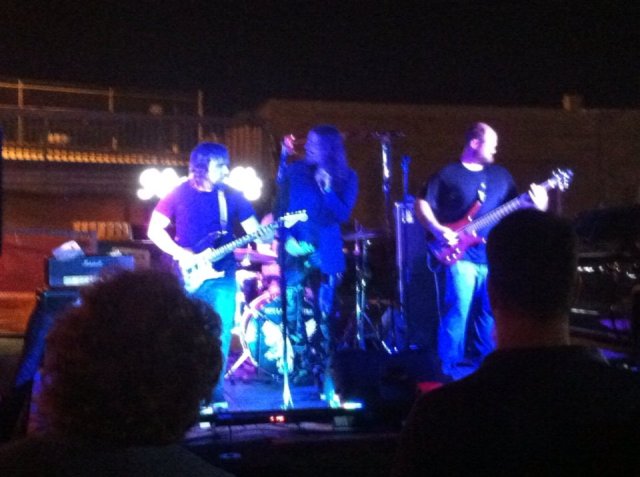 The band’s groove and heaviness called early Soundgarden to mind, and there were serious chops on display (they can cover Tool, which is a serious achievement), but the band’s bluesy Southern identity remained clear and potent. Unfortunately, we were doing soundcheck inside during a lot of their set, so I didn’t get to hear as much of it as I would have liked. I imagine I’ll remedy that in the future. I certainly hope to.

So then it was our turn. We were kind of chomping at the bit, and took the stage about ten minutes before we started playing. As we were tuning up, putting set lists in visible spots and so on, a woman over to the edge of the stage, and came up the steps, standing near/leaning on Justin (our bassist) and Joseph (our keyboardist). I’m guessing her blood alcohol level was somewhere between .10 and “schnapps”, but she was friendly enough, as we learned. “What kind of music do y’all do?”

“Well, we’re really more of a go-go dancer kind of band, but hey…”

Her attention drifted a bit, and she started examining the bass and keys (and the corresponding musicians) fairly closely. She asked if she could get behind the drums and sit in my lap, but decided to return her attention to Joseph instead of scaling my vocal monitor and maneuvering her way around my gear. I guess there’s a reason they call a drum set the traps. I’m not sure Joseph was technically molested during all of this (he is the youngest guy in the band), but I have to extend kudos to his lovely wife Kasey for not mounting a punitive expedition.

The woman wandered away after a couple of minutes, and we got rolling. We did a 15-song, 45-minute set, and I think we did well. We kept the energy up and while it wasn’t an error-free show, I think only the band members noticed any mistakes. I was quite happy with our performance, and I’m glad that we continue to progress and grow.

As we broke the gear down after, we also received our pay, which was larger than usual — enough to pay for the mixing of one of the songs in our next planned recording project. So it was a good night all around, and I made it home by about 2:30 feeling good about this whole rock and roll thing — even if I’m stuck behind the traps.

Happy birthday, Art Bar, and many happy returns, for you and (I hope) for the Berries as well.

Dad, husband, mostly free individual, medievalist, writer, and drummer. "Gladly wolde he lerne and gladly teche."
View all posts by profmondo →
This entry was posted in Music, Why I Do What I Do. Bookmark the permalink.